A Lot of “New” In place for New School Year

As students and parents get ready to start a new school year on August 5, some will be greeted by new principals and everyone will notice additional safety measures in place at their schools. 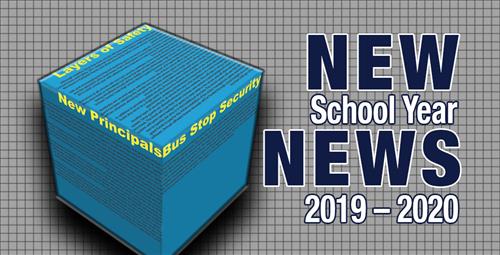 Replacing Angelo as principal at Sara Harp Minter Elementary School is John Gibbas, who is new to the community having moved from Aurora, Illinois. He has over 13 years of experience as a school administrator at the elementary and county office level. Before being hired as the principal at Sara Harp Minter, he served six years as principal of Westmore Elementary School in Villa Park School District 45 in Lombard, Illinois.

Former Sandy Creek High School assistant principal and registrar Kathy Smith is the new principal at Rising Starr Middle School, replacing Nancy Blair who retired at the end of the 2018-2019 school year. Smith has worked for the school system for over 25 years, starting as a teacher at J.C. Booth Middle School. She taught at both Booth and Bennett’s Mill Middle schools before being promoted at an assistant principal at Bennett’s Mill Middle in 2009 where she worked until transferring to Sandy Creek High in 2014.

Although statistics show that most schools will never experience a shooting (Indicators of School Crime and Safety: 2017, National Center for Education Statics), highly publicized attacks like those in Parkland, Florida and others around the nation causes concern among students, parents and staff.

Safe and encouraging learning and working spaces are key for academic success for students and the educators who teach them. That is why Fayette County Public Schools is starting the 2019-2020 school year with added security measures to help prevent ill-intended situations from happening in its schools.

Vestibules are secured spaces with two or more sets of doors and an office sign-in area. Once a guest has been vetted by the outside intercom and camera system, the front doors to the school will be unlocked, allowing the guest to enter the vestibule. Once inside, guests will go through a second security check before being allowed access into the school.

In addition to providing added security of knowing who is visiting Fayette’s schools, the vestibules also serve as a single point of entrance for students who are late, or are coming from an appointment, enabling administrators to keep track of student attendance.

Another layer of security for all schools this year is the installation of a visitor management system. Once guests are allowed entrance in to the vestibule, they will sign-in using a self-service kiosk. The kiosk will scan their driver’s licenses and conduct a quick background check. The system will print name badges for guests to wear while in the school, and will allow administrators to quickly see who is in the building at any time. The school system will use state safety grant funds to pay for the initial installation of the visitor management system and licensing software. Annual software license renewals will be funded through school budgets at a cost of less than $500 per school.

Giving parents peace of mind at school bus stops has been a top concern for the school system’s transportation department. This year the transportation department will launch the new My Stop App, available for IOS and Android devices, which will eliminate the guessing game of when the school bus will show up. The app will actually give parents the ability to look in real time to determine the location of their child’s bus, allowing them to know exactly when their children are picked up in the mornings and dropped off in the afternoons. The app is available for free download at the Google Play Store or the Apple App Store. To learn more about the app and instructions on how to use it, visit https://www.fcboe.org/mystop.

A major improvement will be in place at Oak Grove Elementary School this school year for students, staff and the community.

The safety of students, staff and all who visit a public school is a top priority for the Fayette County Public School System. The school system also works hard to be a good neighbor in the communities where its schools are located.