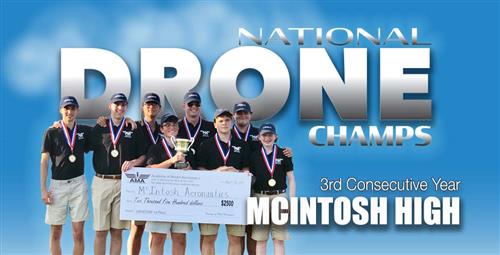 The McIntosh Aeronautics was one of 10 teams across the nation participating in the event, sponsored by the Academy of Model Aeronautics. Team members are Bryce Stevens, Ryan Sheppard, Robert Palla, Joe Metzler, Adrien Richez, Nick Farinacci, Zach Avril, and Dalton Toner.

Teams are challenged to complete a waypoint and payload delivery mission using a small drone. In addition to building the drone, teams are also tasked with the design and build of a delivery mechanism that can support the designated payload. Drones have to comply with special instructions for departure and arrival procedures, and then remain within the assigned airspace.

Teacher Seth Bishop is the sponsor of the McIntosh High School drone team.