The HOSA (Health Occupations Students of America) chapter at Starr’s Mill High joined the community in the fight against Alzheimer’s disease by collecting donations for, and participating in the largest national event that promotes awareness and raises funds for Alzheimer’s care, support and research. 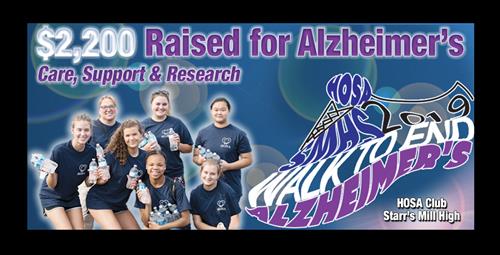 Chapter members joined hundreds of participants who turned out October 5 in Peachtree City to take part in the 2019 Walk to End Alzheimer’s. Not only did chapter members walk, but they also helped walkers stay hydrated by manning water stations.

However, the greatest impact the members had on the walk was the monetary donations that they collected through online fundraising campaigns. Their goal was $2,000, but they ended up surpassing it, donating a total of $2,200.