Cameras, lights, march! Nine Starr’s Mill High band members will take their places in the national spotlight as millions of people around the world watch them parade down the streets of New York City on Thanksgiving day as they perform in the Macy’s Great American Marching Band. 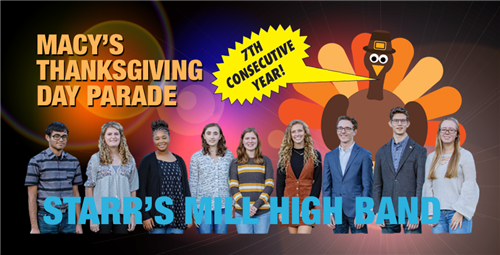 This marks the seventh straight year that Starr’s Mill students have been invited to join the Macy’s Great American Marching Band. This year, the school has a record breaking number of nine participants, most who are returning for a second or third time. For Jaskaran Chawla, Claudia Williams, Kennedy Blanks, Mary Faught, Nicole DiVinitz, Kyle Robinson, and Camryn Kiener, this will be their second consecutive year selected to perform, and for Kevin Allen, this will be his third consecutive time marching in the band.

The parade will start at New York City’s Central Park, and end at Macy’s Herald Square where the band will perform for celebrity hosts, a grandstand audience, and more than 50 million television viewers watching the broadcast live on NBC. Approximately three million spectators are expected to line the parade route.