When the North Georgia Honor Orchestra took the stage at Kennesaw State University, it did so with a number of local performers. McIntosh, Starr’s Mill, and Whitewater High combined to send 12 students to play with the orchestra.

Students from 21 different Georgia schools were nominated, and the Fayette students were among 120 nominations selected to be part of the 75-piece orchestra. They said it was a “marvelous, enriching, eye-opening learning experience,” and they were thankful to be part of the honor orchestra.

Under the direction of Dr. Nathaniel F. Parker, students performed “Brook Green Suite” by Gustav Holst, “A Prayer for Peace” by John Williams, and “Finlandia, Op. 26” by Jean Sibelius. The last two pieces were performed along with the Kennesaw State University Symphony Orchestra. The KSU Symphony Orchestra performed “Three Dances” from the ballet “The Three-Cornered Hat” by Manuel de Falla. 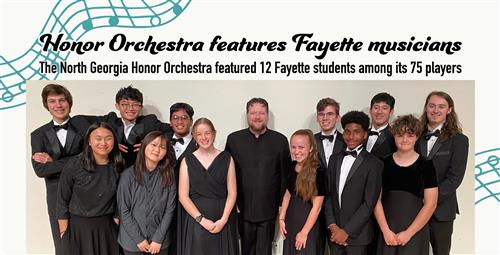