Coach Shannon Bednarowski had one word to describe the feeling of winning state again: Magical.

“It’s an overwhelming sense of accomplishment to win something as prestigious and special as a state championship once, but to have the rare opportunity to win the GHSA state championship four years in a row is incredible, and we feel very fortunate and appreciative,” said Bednarowski. “Our theme this year was ‘Magic,’ and this season was ‘Magic,’ along with a ton of hard work, dedication, commitment, pride, and drive.”

“They were a family and all worked harmoniously together. All had the common goal to do whatever it took to win a fourth state championship in a row,” said Bednarowski. “They are a wonderful group of athletes, and they represent McIntosh well in a very positive manner.” 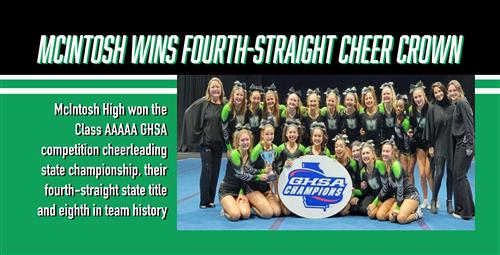