McIntosh High’s Aadhav Sundar is one of the country’s most promising young science minds. Society for Science announced Sundar as one of the top 300 scholars in the 2023 Regeneron Science Talent Search.

Sundar’s project “A Feasibility Study of Lightweight Polylactic Acid Fused Deposition Modeled Propeller Prototyping” earned him a $2,000 prize, along with $2,000 for his school.

The Regeneron Science Talent Search scholars were selected from 1,949 applications from 627 high schools across 48 states, Washington, D.C., Puerto Rico and four other countries. Scholars were chosen based on their outstanding research, leadership skills, community involvement, commitment to academics, creativity in asking scientific questions and exceptional promise as STEM leaders demonstrated through the submission of their original, independent research projects, essays and recommendations.

The 300 scholars hail from 194 American and international high schools in 35 states and China. Sundar is one of just 5 winners from Georgia. 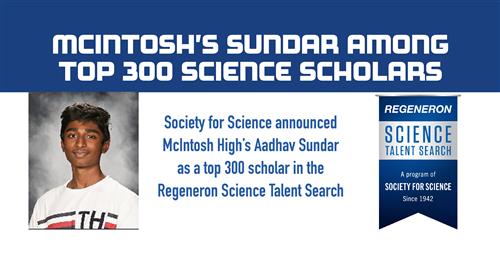