Three emerging architects at McIntosh High are among 15 winners of the 14th annual High School Design Competition presented by the Atlanta chapter of the American Institute of Architects. 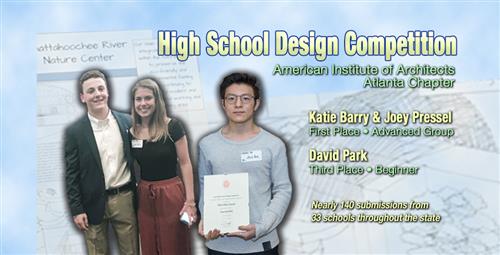 Each year the competition focuses on a design challenge, at both beginner and advanced levels, and invites students from throughout Georgia to submit their architectural concepts. This year’s challenge was to design a bridge over the Chattahoochee River (beginner’s level) connecting to a building that in the  future will be the Chattahoochee Science Center (advanced level).

Sophomores Katie Barry and Joey Pressel won first place in the advanced group category, they were just one of two groups that received an award. Senior David Park placed third in the beginner category, he was among six students who won awards at this level.

Students presented boards showing their conceptional hand sketches along with detailed computer generated drawings. Designs that incorporated the use of nature and water, showed a connection to the environment, and outlined how people would occupy and move through the space were the most successful, according to Johnathan Gould, chair of the High School Design Competition.

This year’s program received nearly 140 submissions from 33 schools in the state. Winners were revealed during a special ceremony at the Georgia Institute of Technology’s College of Design on April 18.