U.S. News and World Report has ranked all five of Fayette County’s high schools in the top 24 percent in the nation on its annual 2019 Best High Schools list. 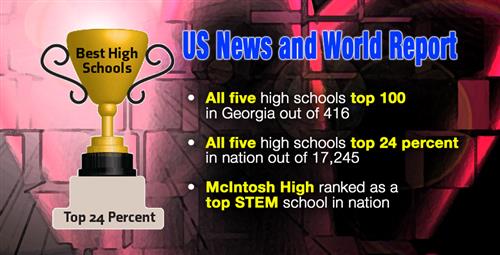 As for statewide rankings, all five high made the top 100 out of 416 Georgia high schools that made the list. The rankings are as follows: McIntosh High, 20; Starr’s Mill High, 27; Whitewater High, 41; Fayette County High, 74; and Sandy Creek High, 97.

New to the rankings this year is a separate STEM (Science, Technology, Engineering, Math) ranking for schools whose students excelled on Advanced Placement (AP) science and math tests. To be eligible, schools had to appear in the top 1,000 of the overall national rankings. A total of 250 high schools made the cut, including McIntosh High, ranked at 242 among STEM high schools in the nation.

For the 2019 list, U.S. News ranked 17,245 public high schools out of a review of more than 23,000 in all 50 states and the District of Columbia. Schools are ranked on their performance on state-required tests, graduation rates, and how well they prepare students for college.