Students in April Cullen’s culinary classes at Sandy Creek High got a surprise to start off the school year when a celebrity chef stopped by to share her industry insight and experiences working as a professional chef. 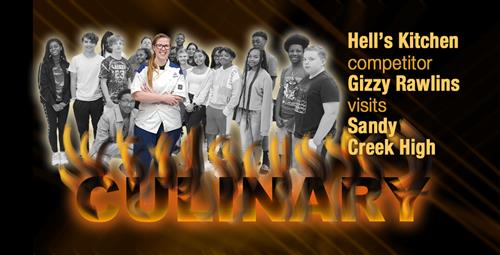 People around the nation got to know Chef Gizzy Rawlins from Atlanta when she appeared on season 18 of Hell’s Kitchen as one of eight rookie chefs in the competition. But Sandy Creek High culinary instructor, Chef Cullen, has known Rawlins much longer, going all the way back to when Cullen taught her at the Le Cordon Blue College of Culinary Arts in Atlanta.

Cullen, who is new to Sandy Creek this year, wanted to start her classes off on an flavorful note by having someone recognizable speak to students about a day in the life of a professional chef.

Rawlins, who now owns her own meal prep business called Get Bizzy Meals with Gizzy, has worked as a sous chef at several notable Atlanta restaurants including South City Kitchen, Kevin Rathbun’s, Bellina Alimentari, and Ecco in Buckhead.

She talked to the students about how much passion and dedication it takes to become a successful chef, and encouraged them to go for their dreams. And, of course, she talked about her time on Hell’s Kitchen and what it was like working with Chef Gordon Ramsey. She even sported her Hell’s Kitchen jacket during the visit.

“It was a great experience, and I think the students learned a lot of valuable information from the advice she gave them,” says Cullen.

Rawlins ended up finishing in 11th place on the show.