The Georgia Department of Education has released the AP (Advanced Placement) Honor Schools for 2020 with all five of Fayette’s high schools earning recognition for the number of AP courses taken by students, and the percentage of students passing the exams. AP courses and exams give students the opportunity to access college-level learning opportunities, and potentially earn college course credits. Fayette’s high schools have been included in categories on the AP Honor School list since the recognition began in 2008. 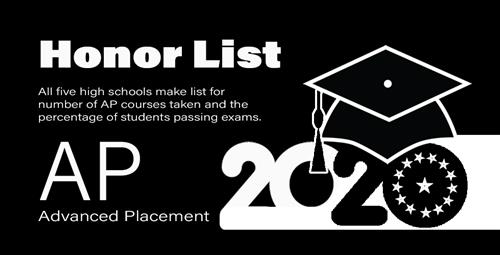 McIntosh High, Sandy Creek High, Starr’s Mill High, and Whitewater High are among the 94 schools in the state making the list for AP STEM Achievement Schools. These are schools where students are testing in at least two AP math courses and two AP science courses, and at least 40 percent of the exams earn a score of 3 or higher (students must score at least a 3 to potentially receive college credit for a course). The AP courses include calculus AB, calculus BC, statistics, biology, chemistry, environmental science, physics B, physics C, and computer science.

Additionally, all of the county’s high schools are listed as AP STEM schools with students testing in at least two AP math and two AP science courses. A total of 183 schools in the state made the list.

These distinctions are not new for the system’s high schools. In fact, this is the ninth consecutive year that McIntosh, Sandy Creek, Starr’s Mill and Whitewater high schools have made the AP STEM and AP STEM Achievement lists since they were added in 2011. This is the eighth time Fayette County High has made the AP STEM list.

Both Fayette County High and Sandy Creek High made the 2020 list for AP Access and Support Schools. These schools have at least 30 percent of their AP exams taken by students who identify themselves as African-American and/or Hispanic with 30 percent of all exams earning scores of 3 or higher. A total of 78 schools in the state received the distinction. Both Fayette County and Sandy Creek have made the list since 2008.

Fayette County High, McIntosh High, Starr’s Mill High, and Whitewater High are listed as AP Schools of Distinction (formally Merit Schools) where at least 20 percent of the student population is taking AP courses with at least 50 percent of the exams earning a score of 3 or higher. Starr’s Mill has been on the list since 2008; McIntosh has made the list since 2012; Whitewater has been on the list for seven consecutive years, and Fayette County High has made the list four times. A total of 70 high schools in the state earned the distinction for 2020.

Fayette County, McIntosh, Starr’s Mill, and Whitewater high schools are among the 85 statewide to make the list for AP Humanities Schools. These are schools with students testing in all of the following AP courses: at least one English-language arts course, two social science courses, one fine arts course, and one world language course. McIntosh, Starr’s Mill and Whitewater high schools have made the list every year since humanities was added in 2015. This marks Fayette County High’s second consecutive year making the list.