Waylon Bennett feels the need for speed. Waylon, a 4th grader at Crabapple Lane Elementary, is burning up the competition on the junior dragster circuit. They don’t go nearly as fast as the big dragsters, but at 60 mph, the junior dragsters can still burn up the track.

Racing with the National Hot Rod Association (NHRA), Waylon recently scored a big win, beating more than 150 junior dragsters from age 6 to 12 in the Mike Bos Championship in Bristol, Tennessee. Along with a check for winning, he also took home a trophy that is taller than he is!

Waylon was a fast learner. He was fully-licensed with the NHRA at 5 years old, and he won his first races at 6.

“I was a little nervous when I made my first pass, but, by the end of it, I was yelling let’s go cause it was so much fun driving so fast,” he said. “You have so many seatbelts and arm restraints, and a fire suit, a helmet and roll cage, it’s really safe.”

Drag racing is a family tradition. His grandfather, who he calls his Oppa, is a drag racer, and Waylon was always around at his races.

“He would let me ride in his dragster to the staging lanes when I was little and help him drive, and I loved it.”

At a competition in Orlando, a young Waylon appeared on a TV show and made himself known.

“The host lady asked me when I was going to start racing like Oppa, and I said, ‘When I’m old enough.’ She asked how old I was, and I told her 4,” he remembered. “She said, ‘You’re almost there, you can get your license when you turn 5.’ Well, I turned 5 three weeks later. A junior dragster was my birthday present, and I had my NHRA License 3 months later.”

The circuit keeps Waylon busy as he travels to nine states every season to race in the Lucas Oil Series and the National Open.

“I love winning money and trophies,” said Waylon. “I Iike hanging out with all my racing friends. We have so much fun, and whoever wins gets water poured all over them. It’s freezing when it’s cold outside.”

He manages to juggle his busy racing schedule with his school work so he doesn’t fall behind on the track or in the classroom.

“Sometimes I take work on the road. Like when we were virtual learning, the drag strip was my background,” he said. “School always comes first, then fun. And if those two things don’t happen I don’t race. If I'm not having fun, I’m taking it too serious.”

He always makes sure to get good grades so he can keep pursuing his passion.

“ If my grades aren’t good, I can’t race,” he said. “But that’s never happened because I really love racing, so I make sure I do good because I like driving fast.” 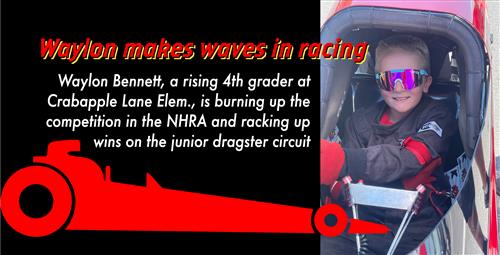