When NBC needed a marching band to ramp up the excitement for season 2 of their popular game show Capital One College Bowl, they turned to the Starr’s Mill High Panther Pride.

Hosted by football legend Peyton Manning and his brother Cooper, College Bowl pits students from rival colleges against each other in an academic challenge covering a wide range of topics. If you tuned into the opener of season 2, you got to see members of the Starr’s Mill High marching band playing contestants onto the stage ahead of their showdown.

Ahead of filming, show producers sent out a mass email to local band directors, and Starr’s Mill band director Scott King jumped at the opportunity for his Panthers.

“I responded within 5 minutes, arranged the theme song that weekend, our wind ensemble class read it and made a recording that Monday, and we were selected,” said King.

Episodes were filmed in June at Trilith Studios and aired for the first time on September 9.

“The experience on filming day was very exciting! I had the utmost confidence in my students and their preparation, flexibility, and maturity,” said King. “There was some ‘hurry up and wait,’ but the students changed gears with ease. I was thrilled to find out that Peyton Manning gave us a shout out at the beginning of the episode!”

“It was very cool to be chosen as a part of every episode of the second season. We've had students participate in nationally-televised events, and there have been other high school bands in the nation that have as well, but we are grateful that our students will be in many weeks of shows - very few high school bands in the nation can claim that. I’m so proud of our students, their parents/boosters, staff, and our program!”

Episodes of Capital One College Bowl are available online at nbc.com and through other streaming services. 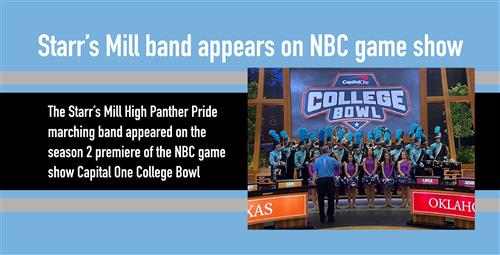