A life-saving bond was built at McIntosh High. Athletic Director Leon Hammond has been in need of a new kidney, and Alan Reeves, a former Chief himself, stepped up to the plate.

Lured to the school library on the ruse he was being celebrated for his recent win as Region Athletic Director of the Year, Hammond quickly found out he was a much bigger winner. Family and friends from the school system and community were there for the ceremony, and it all clicked when Reeves handed him a letter explaining he was giving him a kidney.

As Reeves held up a “Kidney Buddies For Life” shirt, Hammond embraced him, and there wasn’t a dry eye in the room.

“I just thought we were having our regular Tuesday admin meeting,” said Hammond. “I had no clue, honestly. I’m feeling so happy and blessed. I can’t thank him enough.”

Now with the United States Secret Service, Reeves served as McIntosh’s school resource officer for 3 years in the 2000s, and the school always held a special place in his heart.

“I always wanted to give back to McIntosh, I just didn’t know this is how,” said Reeves. “I feel like I’m at a point in my life where I can be here and physically be able to do something like this. I’m blessed already, and I hope that my children will see that this life is more than just about yourself.”

There were hints that something might be coming for Hammond. He had been looking at getting magnets for his car to encourage people to contact him about donating a kidney. His contact at Piedmont Fayette Hospital said she wouldn’t spend a lot of money yet if it were her.

Thankfully for Hammond, the wait wasn’t long. Going on the national waiting list can mean many years of waiting. In May of this year he was told it was time to start looking for a kidney, and he was officially listed in October. Now, he is slated to get his new kidney from Reeves in February.

McIntosh Principal Maggie Walls played master of ceremony, briefly honoring Hammond for his athletic director award before handing it over to Reeves.

“I was thrilled beyond measure that I got to be a small part of Leon's special day. We have all been praying that he would find a match soon, and, when Alan reached out to me, it was all I could do to keep it all together and to keep it a secret,” said Walls. “I adore Leon and his sweet family. I know what a blessing this will be to all of them.”

She was especially pleased to see members of the McIntosh family, even ones that never worked together, bonding.

“I love the heart of this community. I tell people all the time that the best part of McIntosh is the support that you feel as a member of this community, and I honestly mean it,” she said. “McIntosh is a special place for our students, our teachers, and our town.” 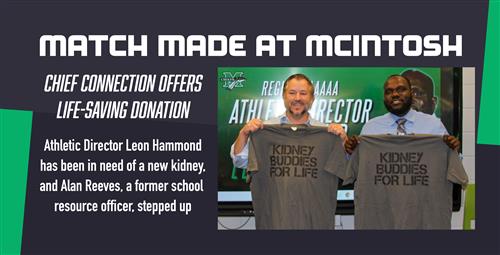